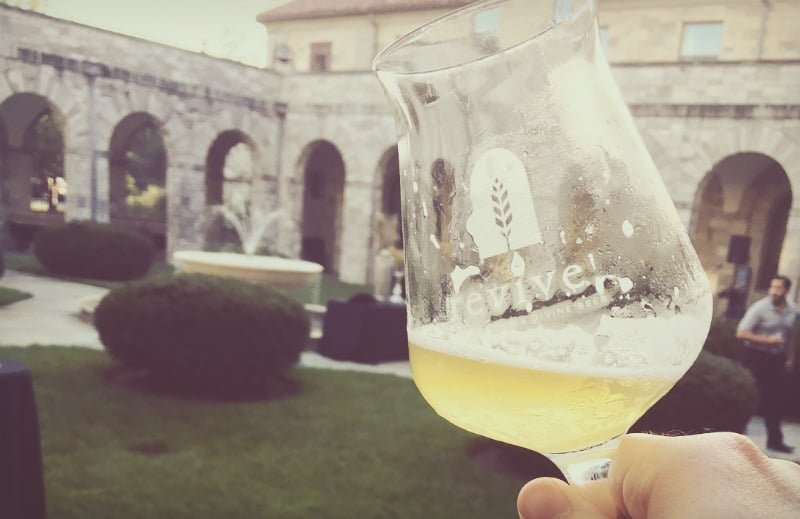 “Food and beer pairings are dead.”

I heard this phrase uttered in a brewery a few months ago, and thought to myself, “But why?” After talking to several other people in an attempt to get to the bottom of this dearth of events pairing two things that go together like peanut butter and jelly, the bottom line appeared to be simple—not enough care. Too many restaurants and event organizers made haphazard pairings and overcharged for them. Consumer interest waned, and the reputation of these events was tarnished.

The name itself is evocative of the festival’s intent—to demonstrate that beer and food can create heavenly harmonies. The Brewer’s Association of Maryland organized the event, taking the 16 gold medal beers from the 2017 Comptroller’s Cup and pairing each of them with spectacular restaurants. Each restaurant crafted a dish to mesh with the beer they were assigned. The result was absolutely spectacular.

First off, the venue: St. Anthony’s Shrine in Ellicott City. As a lover of all things old and ornate, I was blown away by how gorgeous the setting was. Outside the shrine was an open courtyard with a bubbling fountain in the center, and surrounded on three sides by a covered arched colonnade sheltering tables. The evening sun coruscated through the water droplets flung from the fountain to mingle with the aroma of freshly-cut grass and the notes twanging from the bluegrass band.

Inside, the party never stopped. Laughter and sighs of delight filled each room. There was a brewer at nearly every jockey box, and more sprinkled throughout the crowd. I overheard numerous comments about how wonderful it was to talk to the folks who made the beer directly, and how there wasn’t a rush to move out of the way. Some of the chefs were also present, and more than happy to discuss the small slice of bliss you were about to consume.

Throughout the evening, not a single pairing tasted off. Many were adventurous, but all harmonized wonderfully in its own way. One pairing indelibly marked in my mind was the Thai Lager (Pimp My Tuk-Tuk) from Barley and Hops brewed with lemongrass, ginger, kaffir lime, Thai chili peppers, and more. White Oak Tavern made dumplings with shrimp, cabbage, carrots, scallions, and Thai basil, and coated it with a lemongrass coconut milk sauce. The rich flavors matched the spices of the beer, and the milk sauce soothed the burn from the pepper. How can you go wrong with that? As amazing as this combination was, the other 15 were equally as divine.

It is my hope that this event demonstrates the wonders that can be crafted at beer and food pairing events. Event organizers need to sit up and take notice. Pairings are not arbitrary. They may not even be straightforward. But with time and thought, you can combine that lively liquid with fantastic fare to concoct a perfect pairing.